Another question I sometimes face with regard to my passion for ruins is the question of why I respond creatively to the places I visit, and what my work is actually about. The assumption of some is that the main purpose of my art is to implore for the rescue of the ruins which inspire it. But the truth is I am really more concerned with finding some meaning in their current derelict state. I think this downfall is an important chapter in their story, one which should not be in vain and needs to be recorded whether they are eventually restored to life or not.

This issue of campaigning and what part it plays in the appreciation of our heritage was another interesting point raised in the Heritage! TV series. While it is not the main purpose of my own work, I do have the greatest respect for organizations like Save Britain’s Heritage and The Victorian Society for the valuable role they play in securing the protection of our historic places. I found one historic campaign charted in BBC 4’s programme to be particularly thought-provoking; the case of the Euston Arch.

This piece of lost heritage gave the final episode its name of Broken Propylaeums, and its demolition is widely regarded as one of the most wanton destructions of Victorian architecture on our shores. I read about it in Gavin Stamp’s Lost Victorian Britain a while ago, and have seen many a haunting image of this giant masterpiece of railway architecture now absent from its place outside Euston Station. Described by Stamp as a ‘powerful landmark and symbol’, it was unceremoniously torn down in 1961 amid the remodelling of the station, after plans to relocate it to a different site were abandoned.

The cause to save the arch from unnecessary demolition was one of the first major efforts championed by the newly formed Victorian Society. What I found interesting in the discussions amongst the programme commentators, was the suggestion that the failure of the valiant campaign to save the arch was in fact its success. Once the arch had been obliterated, never again would a seemingly steadfast landmark be taken for granted and presumed safe. Its fate highlighted the plight of Victorian architecture in the age of the bulldozer, and its loss may have actually been more influential than its preservation. 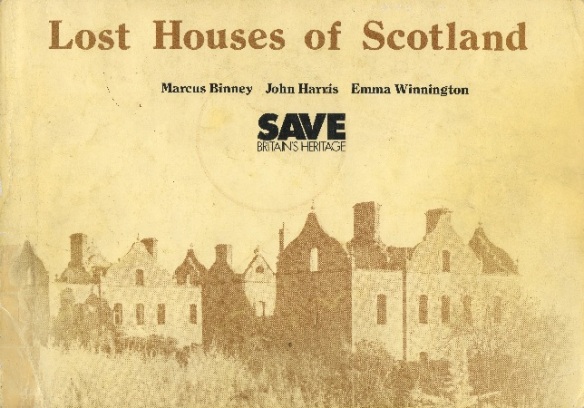 While some consider the demolition of any historic building a complete waste, I have come to find value in such losses. I see the ruins I explore as enduring reminders of all those houses which vanished without a trace, and this has led me to begin a bit of a side-line in researching Scotland’s demolished country houses. My interest was sparked by SAVE’s 1980 publication Lost Houses of Scotland, and through further study I’ve been quite overwhelmed by the number of losses sustained over the past few decades. By anyone’s standards, there are still a great number of stately homes left in Scotland, but when you consider all those which have disappeared it is quite astonishing to realise just how rife they once were across the landscape.

It seems that at one time, anyone who had amassed a quick fortune through business and trade was buying up a piece of land and building his own splendid pile to emulate the nobility. Amongst the aristocracy too were instances of ‘Palace Races’, with rich landowning families bankrupting themselves in the attempt to outdo their neighbours and attract a visit from the Queen. I find this spate of grandiose building utterly fascinating, and have no doubt I would have been swept up in it myself given the opportunity in a former life. But history has proven that this wave of ostentatious construction was unsustainable. 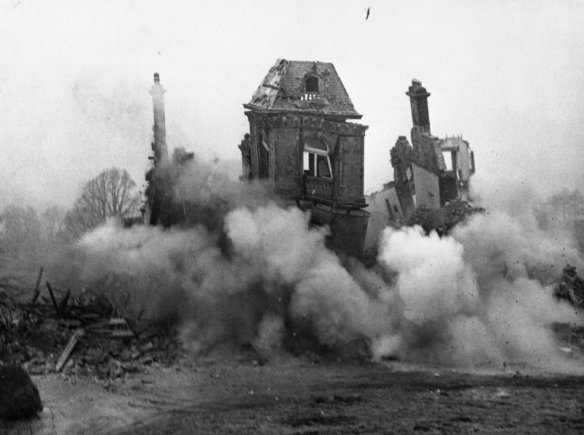 It is easy to imagine these places being destroyed with careless disregard, and I’m sure that this did happen in many cases, but for other owners it was a regretful decision they had little choice but to make. Now widely regarded as money pits, these houses could barely be given away, and to repair the often extensive damage caused by lack of maintenance during wartime requisitioning was simply unviable.

Taking this into account, I find it unreasonable to think that every one of these houses should have been saved at that time. This is not to say that I would condone the same situation now, but I appreciate why it happened when it did. I lament their loss with great sincerity, but I also highly respect it. They were the sacrifices which served to emphasise the value of the survivors. If there is anything in the old adage ‘you never know what you’ve got till it’s gone’, then they have surely been instrumental in the protection of many other buildings today.

Towards the end of the Broken Propylaeums episode, a current campaign was brought to light that would see the reinstatement of the Euston Arch in its rightful place once more. I was thrilled to hear of this proposal, which follows the discovery by historian Dan Cruickshank in the mid-90s of most of the remains of the arch plugging a hole in the bed of the Prescott Channel.  The proposed reconstruction is being backed by The Euston Arch Trust, and to me this raising from a watery grave and resurrection after 50 years of exile is a profoundly more meaningful act than had the arch been saved back in 1961.

While surveying some of the stones which have already been retrieved from the river bed, somebody in the programme made the comment that damage made by the drills which dismantled the arch could easily be repaired. My own gut reaction was that these marks must remain. Short of reassembly and structural consolidation, I think the arch should remain as found, its scars providing a visible narrative of the triumph over its intended end.

4 thoughts on “What is it about Ruins? Part II”