The dusty driveway was dotted with rhododendron, their crumpled blooms just beginning to unfurl in vibrant splashes of purple which peppered the dark clumps of waxy leaves. So common a feature were these exotic blooms on the approach to a large residence that I had come to recognise them as the tell-tale sign of impending grandeur. Ahead, my eye discerned yet another prelude to the ruin I had travelled to see, this time in the form of a tall hexagonal tower standing proud above a collection of lower outbuildings. Its tiered ascent was like that of a great sandstone wedding cake, and as I drew nearer I saw an arch at its base leading to a courtyard beyond. Banished were the prying fingers of decay among this group of buildings. The well-kept appearance disclosed their new role as holiday lets, and provided a notable contrast to the building I could now see nestled among nearby trees. Just a stone’s throw away from this rejuvenated stable range sits Gelston Castle, the fading former centrepiece to its surrounding estate.

I neared the castle, watching as its principal facade gradually revealed itself from behind leaves unstirred by the hot and breathless summer air. Gelston is often likened to a ‘toy fort’, a description I considered particularly apt while surveying the entire length of its entrance front. It really is a purely classical vision of a castle, appearing perfectly formed and self-contained. It does not sprawl, but stands straight-backed and upright, with all accommodation housed in one single oblong block of three and four storeys. Its scale too contributes to the almost dollhouse quality of its exterior; the castellated garb seeming to enrobe an essentially modest house. 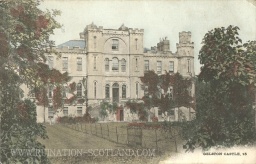 Though strictly regimented by symmetry, Gelston is dressed up in all manner of features befitting a true castle, employed purely for stylistic effect. Corbelled battlements and slit windows abound, while slim round towers tie up the building at each corner, themselves capped with miniature round turrets. Though speckled with lichen, the immaculately dressed soft red sandstone was still crisp, and I thought how Gelston could almost pass as a purpose built folly, so picturesque was it in its ruinous state. At the entrance front a centrepiece juts forth, modelled as a large square tower with a giant roundheaded overarch mirroring the arched windows at first floor level. This is where the principal rooms were located, and I could see the craggy slope where a perron once swept gracefully to the grand entrance. The double wooden doors of the main doorway were surprisingly still in place, and resting tantalizingly ajar.

These elegant features combine to earn Gelston the label of ‘Galloway’s most ambitious essay in the late Georgian castle style’ in The Buildings of Scotland. Their composition is attributed to architect Richard Crichton, a pupil of Robert Adam whose own castle style can be seen to influence the design of Gelston considerably. The house was built for Sir William Douglas, a bachelor of unknown birth who amassed a great fortune in the late 18th Century. Said to have begun his working life as a pedlar, Douglas spent time trading in America with his four brothers before returning to Scotland incredibly wealthy. By 1789 he had started buying up vast areas of land in Galloway, including the small village of Causewayend on the shore of Carlingwark loch. Here Douglas set up various new industries, transforming the village into the town of Castle Douglas which he founded in 1792 and named, rather immodestly, after himself. He was made Baronet in 1796 and acquired the lands of Gelston in 1799. His rise from obscurity to a man of immense wealth had been a quick one, and now Sir William resolved to set about creating a home appropriate to his new found status. Gelston Castle was to be that home, and its construction is said to have been completed by 1805.

I was now on my hands and knees, crawling through undergrowth towards the walls of the castle which shimmered through the leaves beyond. The buzz of insects was suspended in a humid haze, and the closeness of the air seemed overpowering at ground level. I reached the wide base of a corner turret, its rough stone cool to the touch, and followed the course of the east wall. Rounding another tower I found myself at the rear of the castle, where I slipped through a low window and revelled in the leafy shade of Gelston’s interior.

The castle’s wrecked innards seemed at odds with its sturdy exterior; it was as though the interior had simply slumped away from the outer skin. No roof or floors survived, and the remaining walls were stripped back to bare stone but for a large arched alcove which retained its lath and plaster lining. After taking a moment to absorb my surroundings I ventured towards an opening in the wall to my side. I was greeted by a swarm of silent flies, but as they dispersed I was left awestruck by the sight above. An immense swirling vortex extended upwards, glowing by the light of burning arrow slits. It rose through the full height of one of the corner towers to a patch of indiscernible darkness overhead, hypnotizing me as I gazed in wonder. 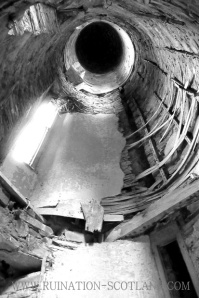 My route through the ruins of Gelston was somewhat indeterminable. The ground was a sea of rubble, rising and crashing in waves which made navigation difficult and prevented me from accessing the far reaches of the castle. Instead I picked a path through the debris as best I could, often having to turn back when I couldn’t progress any further, becoming increasingly unable to distinguish one crumbling wall from another. Large expanses of the building appeared to consist more of flora than structure, giving the impression that the castle was little more than a vast walled garden playing host to a jungle of ferns.

At one point I found myself atop a pile of stones peering through a doorway just above head height, half blocked by rubble. Through leaves glowing semi-transparent in the bright sun I could just make out the stepped curve of a stone staircase beyond. There is something about the sight of a fragmented staircase which always instils an unexplained thrill in me. Often it is the last remaining vestige of a ruined interior, and I resolved to find the one I had just spied. After following an unclear path I discovered two remaining cantilevered spans, their sweeping skyward journey terminating in jagged edges.

From the stair hall I gained access to the entrance vestibule, and peered through the gap between the double doors I had seen from outside. Here more greenery was vying for entry, the castle’s defences against nature’s onslaught breached long ago. A soft glow seeped through the three arches of the entrance, steeping the space in atmosphere. Here was the only real hint of how the castle had been in its heyday, and I imagined the splendid rooms which would once have been reached from this hallway. 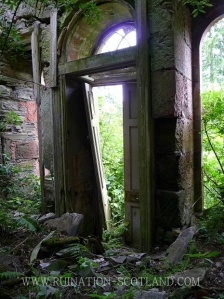 A few minutes later, and I was coasting down a tide of earth leading to the space directly beneath the entrance hall. The cool shade of above turned to a definite chill as I descended into the gloom of this dark ground floor space. The outline of old storage compartments were highlighted from the glare of a secondary doorway, providing direct access to the service quarters when the castle was inhabited. I made my way through the brick lined tunnel towards this blinding opening, blinking as I returned to the heat of the outside world.

Sir William Douglas had but a few years to enjoy being lord of his manor, and died without issue in 1809. His property was divided between various nieces and nephews, with Gelston going to the youngest daughter of his brother James, Mathilda Douglas. In 1813 Mathilda married William Maitland, and their family continued to preside over the estate for most of the 19th Century. Gelston then became the property of the Galliers-Pratts who retained the castle for pheasant shooting, and from whom it was requisitioned during World War II. During this time it served as a home for handicapped boys evacuated from Glasgow, before suffering the common post-war fate of de-roofing once this use had ceased. 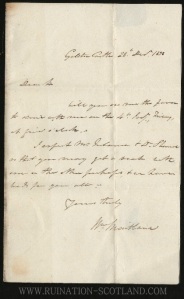 Having now journeyed to the rear of the castle I surveyed its north front, surrounded by the scattered stumps of recently felled trees like tombstones in a graveyard of long grass and pink flowering weeds. The stripping of the roof in the 1950s appeared to have had as little effect on the fabric of this façade as the front. Almost all masonry was still in situ, with the exception of numerous displaced corbels and crenellations which had slipped from their sockets atop the corner towers, leaving gaps like missing teeth. The appearance of the garden front was more demure than that of the disciplined south side, having received a softer treatment in design. It is dominated by a central tower in the shape of a semi-octagon, echoing the tower of the stable block I had noticed earlier. Each of its angles is topped with a tiny turret, and on either side of it glide two gentle bows, anchored by the outer towers. 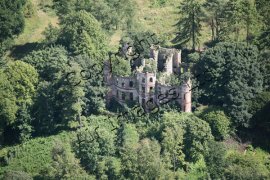 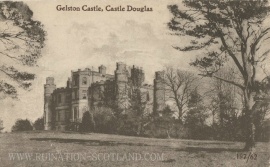 This aspect of Gelston inspired its own stateside counterpart, complete with similar twin bows built by another of Sir William’s nieces, Harriet Douglas. Harriet is said to have fallen in love with her Uncle’s home while visiting from America in her youth, and fulfilled her dream of replicating it some twenty years later by commissioning her own Gelston Castle in the state of New York, now also in ruins.

Preparing to take my leave of Gelston, I cast one final glance over its scenic appearance. The tall windows blurted out their verdant contents in trailing mouthfuls, and it seemed that the castle would gradually recede behind a veil of foliage. As I walked towards the track which had led me to the castle I glanced back. I could still see the western tower peeking out above the crowding bushes, its fragmented crown appearing as an oversized ornamental urn, complete with a sprouting tree.

My thanks go to Alexander Scott of Gelston Castle Holidays for his help with the history of the castle, and to Air Images Ltd for allowing me to include the aerial view in this post