The drive led me through a charming stretch of woodland carpeted in a mass of wild garlic, its heady perfume sweetening the air. Following the curve of the track, I was presented with the entrance front of Barnbarroch House staring out over open fields extending to the North. I skirted to the rear of the house, walking the length of it and arriving at the South-west corner. Here the fragility of Barnbarroch’s walls was particularly evident. Stones teetered precariously looking ready to drop any moment, perhaps only held together by the dead creepers which had first displaced them. I was reminded of one of my favourite paintings – an epic biblical scene by Victorian artist John Martin showing the fall of a great city suspended forever in time, with fragments of masonry frozen in mid-air on their downward plunge. As I stood there, the midday warmth of early summer did little to dispel the chill I felt. There is something undeniably eerie about a house destroyed by fire, and knowing Barnbarroch to have fallen victim to that unforgiving element decades before, I found the sight of its gutted remains somewhat foreboding. 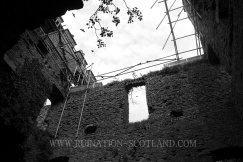 Climbing a grassy slope to the first floor doorway I beheld the crumbling red brick interiors, still fire-blackened in places and affording just a few small vestiges of the home this building once was. That home belonged to the Vans family, a name with its roots in the house of De Vaux who accompanied William the conqueror to England in 1066. The name

has known several variations over the centuries, and the first to inhabit Barnbarroch was known as John Vaus. He is believed to have married an heiress of the Douglas line in 1384 and acquired the lands from Archibald 3rd Earl of Douglas, incidentally the man responsible for the building of the 15th Century tower house at Cavers. A similar structure is likely to have existed on the site of Barnbarroch during the centuries preceding the construction of the present building, and may even have been incorporated into it. This new mansion was built around 1771, after the marriage of John Vans of Barnbarroch to his cousin and sole heiress Margaret Agnew of Sheuchan in 1747 restored the family fortunes which had diminished by the late 18th century. It comprised a rubble-built classical block of two storeys plus basement and attic, with symmetrical elevations and three-window bows to the outer bays of the north facade. 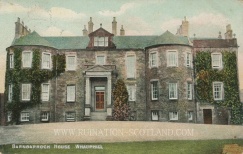 My head tilted backwards as I considered the huge form of the pedimented entrance portico advancing proudly from between these flanking bows, like some ancient monolith not out of place in the Roman Forum. This was the product of alterations to Barnbarroch commissioned by Robert Vans Agnew and undertaken by John Claudius Loudon in 1806. While predominantly a landscape gardener, architectural writer and cemetery designer, Loudon did undertake some architectural works and Barnbarroch is considered important as a rare example of such a commission. Loudon had originally drawn up plans for a more extensive remodelling of the house, his designs showing an elaborate vision of transformation, but in reality only a few minor changes were carried out. These included the addition of the portico, altering floor levels, creating pedimented attic centrepieces and the construction of a new full height single bay extension to the West. This was crowned with a balustraded parapet and ball finials and boasted a projecting sandstone bay to the south side.

the house to the opposite doorway where I had stood moments before. Beyond this would once have stretched an infinite avenue bordered by forest, giving views across miles of parkland from the house. This was again Loudon’s work; part of an extensive planting scheme which transformed the formerly featureless park to the south. His plan also created a lake reached by ornamental steps from the garden front, and a waterfall which he intended to “resound through the woods and even the apartments of the house, and give and an air of enchantment to that old place.” Moving onwards, I now ventured inside the house. Pushing through dense vegetation I made my way to the adjoining service wing, built around 1860 and supposedly funded by the sale of the Agnew mansion of Sheuchan at Stranraer a few years previously. These spaces too lay ruinous and curtained in ivy. 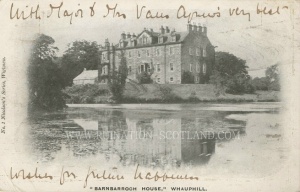 The affluence of the Vans Agnews was once again dwindling towards the mid-20th century, but in 1941 their fortunes were to take a disastrous turn. In the early hours of October 23rd, the servants of the house were awoken by the noise of a fire and raised the alarm. The Galloway Gazette reported at the time: “some jumped from the windows, seriously injuring themselves while others used ropes to climb down from the building.” Water from the garden lake was used in an attempt to curb the flames but the fire proved too ferocious. It spread through the entire building and sadly claimed the life of the lady of the house, Ada Vans Agnew, in whose bedroom the blaze was believed to have begun. 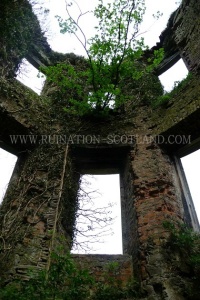 silence where once was the hum of life. At a naturally decaying house, such quiet can usually be considered peaceful, as though the place has slipped into a gentle slumber from which it may never wake. The silence at a burned house like Barnbarroch however always seems more profound, more damning. It is in such eerie contrast to the tumult and confusion that must have dominated in the hour of the place’s downfall. There is something so horribly sudden about ruination by fire. While an abandoned house deteriorates slowly over time and gradually returns to the earth, a burnt house is gutted instantly; the orange blaze tearing mercilessly through its structure in a mere matter of minutes. The result is a decidedly unsettling quiet.

As I made my way down the bank to the rear of the house, through the garlic and bluebells now encroached over Loudon’s picturesque grounds, that ominous silence was broken by a gentle breeze stirring the surrounding trees. I came to the remains of the lake, now silted, stagnant and obscured by stealthy undergrowth. Glancing back up the bank I could just distinguish the outline of the house through the trees. The weight of tragedy seemed to have taken its toll on those old walls but still they stood, resolute and expectant. Only time will tell if Barnbarroch will ever rise from its ashes of all those years ago.

Special thanks go to Jamie Vans and Vance Miller for their help regarding information about Barnbarroch.