I approached the old estate of Cavers on an overcast autumn afternoon, anxious to find something to make my journey into Scotland’s borderland worthwhile; my morning search for another ruin having proved fruitless as the house had been demolished.

Arriving at the edge of woodland amongst a small cluster of houses, I knew I was in the vicinity of the ruin and set out to locate its remains. The overhanging cloud and dense woodland contributed to a rather 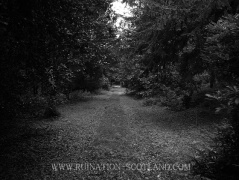 oppressive atmosphere as I became disorientated by the criss-crossing paths and tracks. The dark trees seemed to bear down on me as I turned this way and that, taking a few wrong-turns but eventually discerning a path leading to an area of light amidst the darkness. Following this, I emerged into a small clearing beneath a dull sky, fir branches parting to reveal the truncated form of Cavers House before me, its tall walls closely bordered by sentinels of pine. The clearing had the air of a place utterly forgotten and I knew then that my journey had indeed been worthwhile.

To chronicle the story of Cavers in full, it is necessary to go far beyond my usual historical and architectural knowledge which generally focuses on the past two centuries. The pursuit to properly understand its origins and decipher it’s evolution as a building has been

fascinating, having taken me back to the 13th Century. At this time the lands of Cavers belonged to the Balliols, an Anglo-Norman family whose name I have found to be deeply interwoven with the conflict over the Scottish crown. The Balliols had claim to the throne of Scotland and indeed ruled the country on two brief occasions in the late 13th and early 14th centuries. They presided over Cavers for around 150 years, until such time as Edward Balliol was ousted during the second war of Scottish independence after renouncing his claim to the throne. His former lands were granted in 1352 by King David II of Scotland to the Black Douglases who had been instrumental in securing Scotland’s independence, and it is the Douglas family who were to occupy Cavers for around the next 500 years. In 1878 their direct male line became extinct upon the death of the 20th Earl and Cavers passed to his niece who, after marrying the following year, began a new line of Palmer-Douglases who were to occupy Cavers for a further 3 generations.

Although now partially demolished Cavers House was a composite building, much aggrandized by the Victorians but with far older origins. Its present day remains still give a sense of its piecemeal expansion, and photographs of its 19th Century incarnation provide ample opportunity for dissection to determine its various phases of construction. The original castle of Cavers was built around 1200 by the Balliols and is the oldest known building on the site. It occupied land which slopes to the South and East, sure to have commanded excellent views before the planting of commercial forestry in more recent years. This raised position was not chosen for the aesthetic value of its vistas however, but alludes to the building’s original purpose as a defensive structure.

Around the turn of the 15th Century the 3rd Earl of Douglas constructed a new tower house, known locally as Warden’s Tower and believed to incorporate part of the C13 castle at ground level, given the use of ashlar at its base and the presence of an arrow slit on the south wall. This tower was of five storeys with rubble walls between four and eight feet thick; again demonstrating its role as a stronghold to protect the occupants within. The location meant it was still vulnerable to the effects of border hostilities and the tower is said to have been burned in the mid-1500s. Its two upper storeys were reconstructed during the C17, but it was around 1700 when the first extensive additions were made. The relative peace between England and Scotland by then meant that the keep’s former role to defend was no longer paramount, and the building was converted into a classical mansion house with a new 7-bay façade to the North, a three storey bowed addition and further extensions to the West with Venetian windows. 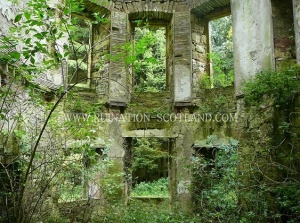 alterations to their newly inherited home from 1881-1887. The house was transformed according to fashionable Victorian tastes with a new entrance wing to the North and further extensions to the North-West including a service range. A host of minor adjustments were also carried out; the old tower house which formed the South East corner of the now fully-fledged country house was given gabled attics, its windows were altered, an oriel window was added and the Georgian bowed section was reduced to two storeys. They also fixed a date stone to the

South East wall reading 1200, presumably referring to the older parts of the tower. Internally, vaults above the first floor were removed revealing a C13 piscina niche with foiled head which can still be found amongst the undergrowth, again suggesting the base of the tower to be of considerable age.

These additions were to last until 1953 when Cavers was used by the army as target practice in an explosives exercise, following a sale of its contents. Its owner of the time, the 23rd Earl, lamented: “I tried to sell it – at any price. I advertised it up and down the country, I approached the county council and the government. I asked my MP, I offered it to the National Trust. I suggested it might be an hotel, a holiday home, a school, a hospital, a place for old folk, and I would have let it go for £4,000. They all said that whatever happened it mustn’t be demolished, but nobody would take it. So now it goes for whatever its insides will fetch as scrap and I’ll be left with a ruin.” Everything of worth was sold – doors, windows, flooring, bathroom fittings and central heating pipes amongst the loot – and in the end the army’s detonations brought down the Victorian extensions, leaving the tower house and a few other fragments standing a solemn reminder of Cavers’ fate. 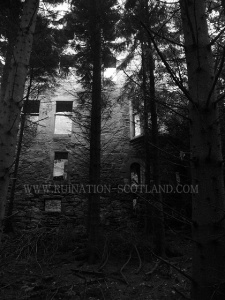 Walking amongst the reduced shell of Cavers, I was struck by the might of its oldest walls, so far able to withstand the collapse of ruination as well as the destructive force of explosives. Climbing down the bank to its Southern aspect I could imagine the foreboding structure it must have appeared from a distance to any would-be plunderer, before the eerily hushed forest obscured it from view. Rain began to fall as I took a final look inside the house, sheltering in an arched alcove and feeling the house surround me. The secluded clearing was a peaceful resting place and I imagined Cavers would gradually fade further into its surroundings, becoming engulfed by greenery. The rain seemed to be setting in for good so I decided to depart, leaving through a doorway once linking the old and new parts of the house, now simply giving way to the elements. Before leaving the clearing I turned for a final glance of Cavers, noting the ghostly imprint of former rooms on its scarred North wall, the scene of the mutilating blast fifty years ago.