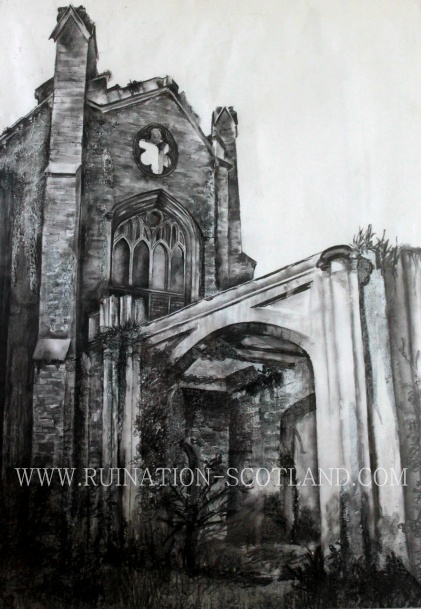 It seems appropriate that this be the first artwork I feature, as it represents the very outset of my venture into the world of ruins. Not only was it my first piece of work based on a derelict mansion, but it also depicts the first house I visited – Cambusnethan Priory. After all of the buildings I have found since, it still remains one of the most forlorn but equally most beautiful places I have visited.

I re-discovered Cambusnethan years after glimpsing it as a child, as detailed in the ‘About the Project’ page on this site. Thinking back to that grey April morning, I can still remember the overpowering sense of wonderment I experienced as I approached the tragic wreck of this exquisite Gothic building. Despite its stunted spires and abused interior, my captivated eye still saw much of Cambusnethan’s former majesty. Many people see ruins as predominantly sad places, but the emotion I experienced on that occasion was different, something heightened which I’ve never been able to fully describe. The atmosphere of this place was intoxicating, unlike anything I had experienced before. I was well acquainted with country houses, having spent many a family holiday touring England’s stately homes, but I had never before fully seen, or even imagined one in such a state of devastation. Endless questions raced around my mind and I immediately craved to know the house’s secrets and the reasons behind its current situation.

That day was undoubtedly a turning point for me, and the foundation for the journey I’ve been following since. It is incredible that such a chance happening produced so profound an effect. My re-discovery of Cambusnethan was quite unexpected but I now feel I was drawn back to that place for a reason. I’m sure I will write more about the Priory at a later date, but for now I leave you with this image to launch this blog as the latest chapter in my saga of Scotland’s ruined mansions.