While staying at Auchinleck House my evenings were spent mostly in the Library, enjoying the warmth of a log fire while browsing the rows of handsomely bound spines. Libraries have always held a potent attraction for me, stirred by the prospect of abundant knowledge just waiting to be discovered. It is frequently my favourite room when visiting any country house, being a major component of any self-respecting stately home. These private collections, often maintained and refined by generations of a single family, reveal the tastes and interests of those who once lived there. I find it a sure method of determining anyone’s passions; search through my own shelves and you will immediately learn what varied topics enthuse me.

Central among my interests is, of course, the subject of ruins. Since beginning to research this field I have been accumulating my own humble library relating specifically to my architectural interests. Among academic works about style and period, and artistic volumes of photography which line my shelves, there are a number of texts containing information about one or another of my coveted ruins.

The fragile walls of these places speak of mysterious tales lost in time, and I enjoy seeking out any book which includes even just a mention of one of the houses I’ve explored. To this end I have been known to purchase a book for the content of a single page, surely a crazy prospect among those who value the convenience of today’s e-readers. But there is something alluring in the physicality of an actual book I find hard to resist, particularly if it is some aged and battered old tome. The vast majority of books I’ve accumulated are now out of print, and I find tracking down a rare or widely unavailable title highly rewarding, conjuring a feeling of having unearthed forgotten knowledge.

With an ever growing list of books to source, my modest collection will hopefully continue to grow. Below is a selection of my favourite or most interesting books, highly recommendable to anyone who shares my interest in this field.

The Destruction of the Country House

Over the past forty years there has been an undeniable upsurge in the appreciation of country house architecture which continues to this day. It seems only accurate to attribute this changing attitude, at least partially, to The Destruction of the Country House. This book accompanied the seminal exhibition of the same name, held at the V&A in 1974. The event brought the widespread plight of historic houses in Britain vividly to the public eye, with its ‘hall of lost houses’ fashioned like a great falling monument emblazoned with haunting photographs of the demolished and decrepit. Leafing through the book, it is plain to see that it came at a time of crisis. Across the country buildings of the utmost beauty were suffering from neglect and many were already lost. They were regarded as unfashionable, oversized and associated with a collapsed social structure from which many were still keen to disassociate. The work of Roy Strong, Marcus Binney and John Harris in staging the exhibition brought about a turning point, successfully highlighting the intrinsic value to the nation’s heritage of what they eloquently describe as “perhaps the supreme example of a collective work of art”. 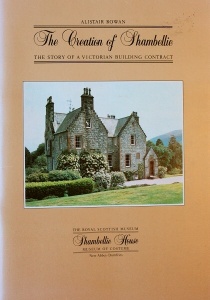 Though little more than a booklet in size, this is definitely one of my most interesting and entertaining reads. The Creation of Shambellie is a rare insight into the world of Victorian building contracts among the landed gentry. Compiled by Alistair Rowan in 1982 to mark the opening of the house as Scotland’s National Museum of Costume, the book draws from a collection of historic papers to chart the fraught construction of this modest mansion of 1856-7. The tale is dominated by the personality clash between Shambellie’s proprietor and architect, telling of the constant misunderstandings and underestimations which hampered the project. The owner, William Stewart, was by all means a fussy man whose incessant penny-pinching was ill at ease with his architect’s relaxed attitude towards cost. Stewart essentially wanted a £5,000 house for half the cost, but this naïve optimism of how far his budget could stretch was soon dashed by David Bryce’s tendency to “design generously and readjust the price later”. As a result the house shrank, was pruned of its bartizans, went without a third staircase and adopted a fairly plain entrance front to conserve cost. Nevertheless it remains a beautiful building in my very favourite style of architecture, the confirmed closure of which I was deeply disappointed to read of recently.

No Voice from the Hall

In these “early memories of a country house snooper”, John Harris leads the reader on an intoxicating trail of abandonment in post-war England. His words evoke a strange period when a blanket of uncertain silence had fallen over many of Britain’s country estates, their grand residences vacated and shuttered in the aftermath of wartime requisitioning. Painting a picture of mass desertion, Harris recalls his days of traversing the countryside in search of emptied piles solemnly awaiting their fate. With chapters like “The Alsatian in the Bath”, he tells of his encounters with the unexpected and the downright bizarre, like the case of the Old Masters at Kenwood House and other stashes of priceless treasures unearthed along the way. This journey is a compelling one, making me wish I’d been around in those years following VE Day, able to experience the incredible wealth of abandoned fodder which would later be razed to the ground.

Recommended to me by someone I met on one of my early explores, this has become without doubt my ‘bible’ as far as ruin-hunting goes. Published by SAVE Britain’s Heritage in 1990, Scotland’s Endangered Houses is a uniquely in-depth study of the case of derelict houses in Scotland, ranging from the modest to the massive. Now over twenty years old, this book remains the sole work of its kind, an example of SAVE’s tireless campaigning to find new uses for historic buildings. Marcus Deans and Mary Miers offer advice to owners and would-be restorers on legislation, sources of assistance and possible solutions, accompanied by 140 case studies of neglected Scottish houses. While the spate of country house demolitions which began in the mid-20th century had by this time waned considerably, the authors remind us that the fight was still on, declaring that “even since going to press two more casualties have occurred amongst these pages”. While a good portion of the residences featured amongst its pages have now been restored, this book remains the source where I first encountered many of the ruins which have formed a part of my various art projects.

An original auction brochure dating from 1882, here is one of my most prized artefacts. This beautiful volume catalogues the hundreds of paintings, pieces of porcelain, items of furniture and other decorative objects of exotic origin which had filled the apartments of Scotland’s largest country seat for generations. As a prelude to its eventual demolition in 1919, Christie’s auction house offered the contents of Hamilton Palace in an exclusive sale lasting 17 days and fetching £397,562.0s.6d, a colossal sum at the time. On the first day’s sale Dutch and Flemish pictures achieved the highest daily total of the entire event, with the most expensive item selling for £4,252.10s.0d. Many of the Palace’s riches have now found their way to the display cases of museums around the globe, able to be widely admired owing to the mass dispersal chronicled in this historic tome.