Since a young age I’ve been fascinated by ‘big houses’. Enchanted by their stately interiors and impressive edifices, I’ve always fantasized about living in a castle or mansion. Last week gave me just a taste of what it’s like to call such a place home.

Auchinleck House in East Ayrshire is owned by The Landmark Trust, a charitable organization who rescue endangered buildings across Britain and make them available for holiday rentals. My Mum, a fellow historic house enthusiast, has stayed in Landmark properties before, and last summer we were browsing their website with purely innocent intentions. Needless to say our willpower soon faltered upon finding a stately mansion close to our home available for a discounted winter rate the following January. Within a few minutes we’d egged each other on to the point of booking Auchinleck House (capable of sleeping a party of thirteen) for just the two of us! It was a somewhat crazy whim, but the prospect of indulging our shared delusions of grandeur proved just too inviting.

Fast forward a few months and we were approaching Auchinleck, unable to contain our supressed excitement any longer, and delighting in the welcome sight of its glowing

Georgian windows through a flurry of snow. I often find pure classicism a bit uninspiring; the rows of identical windows on a massive bare edifice often seem mundane. But as you near Auchinleck’s east elevation it becomes apparent that this is not your typical reserved classical block. The front is of beautiful soft pink and blue-ish stone, enlivened by an ornately carved pediment and fluted columns, the entrance steps and balustraded roofline bedecked with shapely urns. Along with the distinctive flanking sandstone pavilions, these details combine to form a unique and engaging facade “all the more interesting for its deviation from the strict rules of classicism” as stated by Landmark’s written history of the house. 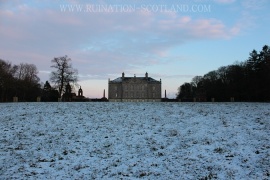 It was truly magical to have the run of such a place for a few days, and despite its grand size it was easy to feel at home in Auchinleck. Landmark acquired the house in 1999, restoring much of the interior after a decade of water ingress had taken its toll. Their subsequent decoration and furnishing has achieved a perfect balance of splendour and comfort, with grand spaces like the dining room and stair hall offset by the cosy bedrooms and warm library which really wrap themselves around you.

We really were like children in a sweet shop, delighting in the novelty of having to take twice the normal number of paces to cross a room and having a choice of route to our desired destination. It isn’t until you come to a place like this that you realise quite how distracting day to day life can be. With no televisions or internet access Landmark 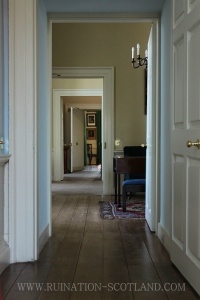 properties offer a wonderful opportunity to appreciate the more simple pleasures which are easy to overlook. Days were spent taking strolls around the grounds, exploring the remnants of the old estate and admiring the house from different vantage points. Despite taking several books and other activities to keep me busy in the evenings, I found that just enjoying the hearty warmth of a roaring fire and appreciating the surrounding rooms were occupation enough.  All in all Auchinleck provided a very welcome retreat, and I have returned with batteries well and truly recharged. Now I just have to get used to the more modest size of my own bedroom once more! 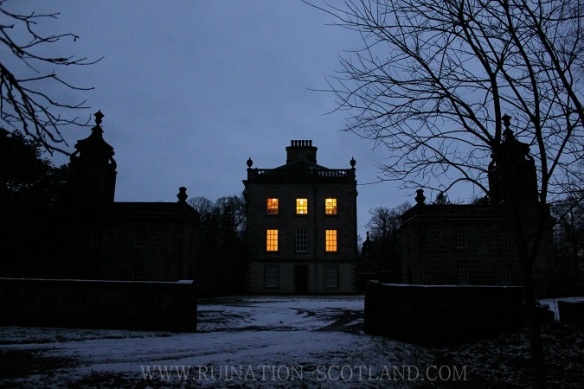 1 thought on “Delusions of Grandeur”